On Saturday, November 26th, 4th year Department of English Studies student, Mami Yuguchi, won the 10th Annual Student Interpretation Contest hosted by Nagoya University of Foreign Studies.  12 contestants from 12 different universities competed in the event.  Each contestant was nominated by a professor and the theme of the contest was “Youth Political Participation in a Globalized World.”

Before the contest, 12 subtopics were announced and each contestant was expected to study all of the topics in preparation for the event.  Example Subtopics included:  “Voting age in Japan,” “Youth policies and youth participation policies,” and “Democratization in Japan.”  On the day of the contest one subtopic was assigned to each contestant through lottery.  Mami’s topic was “What is politics?”  This dealt with terminology and discussed the historical background of the word “democracy.”

The contest was done in a ‘talk show’ style with one English Speaker and one Japanese speaker and the contestant in between both.  A moderator introduced the subtopic and the two speakers discussed the assigned topic and then each contestant was required to interpret what both speakers were saying. This was done in 3 sets.

After the contest, we asked Mami about her experience and her advice for others who want to improve their interpretation skills.

Did you have any specific strategies that helped you during the contest?

“I kept in mind to take notes of all the numbers or names the speaker had said. My professor emphasized how important it was for interpreters to deliver accurate information dealing with numbers so I paid extra attention those details.  Also, I tried to act really calm, almost too calm, so I could deliver my messages in a clear, smooth, professional manner. When I looked at the scores, I scored really high in accuracy and presentation so I guess that was the key.”

What was the biggest challenge you faced participating in the contest?

“The biggest challenge was not making a fool of myself in front of a bunch of people.

I really didn’t have time to prepare for the contest. I was working on my undergraduate thesis, and my professor was busy as well, so we didn’t have a chance to meet until two days before the contest. So, my professor and I tried to take an easy approach, without worrying much about the results.

But when I got to the contest, I heard other contestants, talking about how they practiced with their teachers after class, read a lot of articles, etc… And because of that I got a bit nervous and misheard one of the rules. Apparently, the rule was to interpret everything that was being said, once I was introduced. But I thought I didn’t have to interpret what the moderator was saying, for example introducing my subtopic. So, I didn’t say anything until the two speakers I had to interpret for started to speak. But no one talked for a while so I asked through the microphone “I heard we didn’t need to interpret this part.” But because no one answered, I realized it might have been my mistake and I hurriedly interpreted what I assumed I heard, although I didn’t take any notes.

That calmed me down. I mean, I sort of made a huge fool of myself in front of a whole bunch of people but that made me feel like “oh, whatever, I’ve already made a fool of myself, what else can happen?” After the contest ended, the judges told me that they were very surprised how calm I was during that tiny commotion so I guess that helped a lot! “

Do you have any tips or suggestions for students who want to improve their interpretation skill?

“I’d always look for opportunities to interpret or translate. I occasionally worked as a student interpreter throughout my university years and I’d help friends, teachers, or actually anyone if they needed someone to translate something. To be honest, I enjoy doing this, and never felt it stressful. Whenever friends or friends of friends from overseas come to Japan, I’d be like their mini tour guide/interpreter and I’d have a lot of fun.  The great thing about doing all of this is that you get to meet so many people, and you get thanked a lot!

We congratulate Mami on her hard work and incredible achievement! 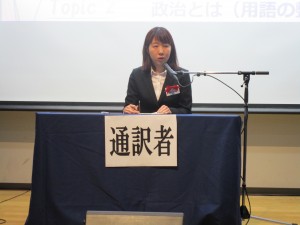