On December 10th,  a group of students from the English department participated in the Langauge Plays Theatre festival as guest performers. The students performing were 2nd-year students from Professor Kimiyo Ogawa’s English Skills Class. The play began as an in-class performance, but thanks to the kind consideration of the teachers from the Langauge Plays club, students from Professor Ogawa’s Skills Class were invited to perform for the first time at the theatre festival. The idea of this play and the script were entirely original and conceived by the students and Professor Ogawa. 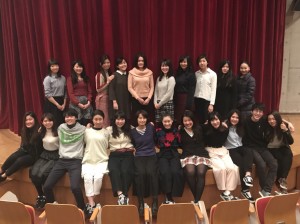 The play was an adaptation of the Japanese anime “Sazae-san,” themed around “sexuality.” The adaptation imagined the world of “Sazae-san,” 6 years later. Tara-chan has started to learn ballet, Wakame secretly wants to go to Harvard to become a lawyer, and Katsuo is anxious whether he should tell his family that he is homosexual. Namihei and Fune-san are concerned with their children and grandson’s future. Namihei is outraged when he hears Tara-chan’s dream to become a ballerina, telling him a man should focus on his studies and getting a good job. Fune-san worries about how Wakame is studying too much and doesn’t take any interest in learning about housework. Sazae-san tries to help Wakame by working late hours to earn money for her to go to Harvard. When Namihei finds this out, he feels his family has betrayed him, not listening to a wise man’s advice.

The performance not only showed the linguistic and performing skills of the students, but some of the main topics studied in the English department such as “gender” and “LGBTQ” issues. The conflict between Namihei and the children portrayed the conventional value of gender roles and family reputation very well. The heartwarming scene where Namihei accepts Wakame and Tara-chan’s dreams and Katsuo’s sexuality lets us realize that the most important thing is the individual’s happiness, and not what “世間(society)” thinks of them.

Editors from Angles, the Department of English Studies Journal of writing, introduced the performers from Ogawa-sensei’s class at the event. It was a wonderful experience for everyone involved.