TOP > 学生のブログ > What the John Nissel Cup Has Led Me To

What the John Nissel Cup Has Led Me To

On a flaming, hot summer day in 2015, I came to visit Sophia University for the first time. I was in my second year of high school, and it was high time I decided on a university for pursuing my higher education. I have always wanted to study languages ever since I was thirteen. Sophia is, needless to say, renowned for its high-quality foreign language education and remarkable international diversity. Given that, I was instantly determined to aspire to become a student at this cosmopolitan institution. As I was looking at the university brochure thoroughly on my way home, one thing caught my eye: The All Japan High School English Speech Contest for the John Nissel Cup. Without a second thought, I decided to challenge myself and subsequently applied. That was the very beginning of my journey to Sophia.

I began drafting my speech and went through countless versions. As I merely had roughly two weeks to prepare, it was not an easy process. To make things more challenging, the deadline of the submission of the manuscript, as well as the recorded speech, happened to fall on the same day I was leaving for Vietnam for a school project. I managed to come up with a satisfactory manuscript on the day of my departure, and I started recording my speech, which was the most difficult part. After about ten takes, I burned it to a CD in a rush and left for the airport. I somewhat managed to not miss my flight, and to my great surprise, I, fortunately, received a letter after about a month saying that I was chosen as one of the twenty-one finalists. When I first learned that I was going to be in the finals, I could not believe I was just a step away from achieving my short-term goal.

The finals day came quickly and I was absolutely nervous about making a speech in front of a crowd. The one thing I was confident about, however, is my message: Language diversity is essential for us to be able to “live together in a globalized society.” I was the fourth speaker, and as my name and the title of my speech were announced, I started to deliver my speech. I felt comfortable standing on the podium despite the fixed eyes of the audience (and the judges!) instead of being nervous. Finishing my speech, relieved, I answered my question, smiled, and stepped down the stage. As I walked towards my seat, I saw Sara, my predecessor, giving me a thumbs-up with warm, comforting words of “good job!” She was my inspiration indeed — what a humbling moment it was to receive such a compliment from the champion herself. Towards the end of the contest when it was time to announce the winners, I could hear my heart beat fast. All the other twenty finalists were eloquent, confident, and poised. I truly felt first-hand how competitive and incomparable the contest was, and I affirm it still is. After the judges deliberated, the runners-up were announced, and my name was ultimately called as the first-prize winner. Never did I imagine leaving the room as the fifth winner of the John Nissel Cup, with a one-year scholarship if I get accepted to study at Sophia. 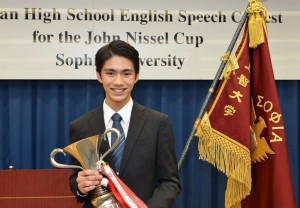 After the contest, I realized how much I loved the English language — its universality, diversity, and practicality made me want to pursue studying it even deeper. English had been my favorite subject in high school, and I have since wanted to improve my knowledge of the language. Moreover, the classes offered at Sophia were captivating, the backgrounds of the professors are supreme, and the academic environment in which the students can learn is extraordinary. I then set my heart on aiming to be a student of the Department of English Studies. Nearly a year after, I learned in September 2016 that I passed the entrance examination, and I was overwhelmed with joy and felt proud of myself, just like I did when I won the John Nissel Cup.

Today, I am extremely privileged to be a part of the Department of English Studies. The department has given me numerous opportunities to use English on a day-to-day basis, learn in depth about the English-speaking world, and improve my writing abilities. It has also allowed me to explore a wide range of academic disciplines centering on English and its speakers, and, to have the chance to teach English to middle-school children in Siem Reap, Cambodia, last summer, both of which I would not have been able to do had I been affiliated to a different department. It is equally worth mentioning that I am blessed with supportive peers and professors from diverse academic, cultural, and linguistic backgrounds. Certainly, the fact that all of us embrace English not only as a tool for communication but also as an academic discipline, in my opinion, is the ideal environment for me to grow as an individual. 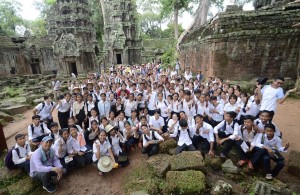 Photo: With students in Cambodia. I had the pleasure of teaching them English last summer as part of the STP  (Summer Teaching Program) activities.