Monumenta Nipponica, first published in 1938, is one of the oldest English-language academic journals in the field of Asian studies. It was founded at the initiative of Johannes B. Kraus (1892–1946), professor of economics at Sophia University, who served as the journal’s first editor. Sophia University has continued to publish the journal and support it financially until today.

From the beginning MN has served as an international platform for researchers of different nationalities and disciplinary backgrounds to publish original scholarly contributions on Japanese history, literature, art history, religion, and thought, as well as translations of important Japanese literary and historical sources.

Owing to the difficulties of the war years and the immediate postwar period, publication of MN was interrupted from 1944 until 1950. Publication resumed in 1951 (with volume 7), and since then MN has continued to hold a place as a leading peer-reviewed journal on Japan. The Japan Foundation has supported the journal since 1973 by purchasing copies and distributing them to institutions worldwide. As early as 1999 the journal was chosen for inclusion in JSTOR’s “Arts and Science 1 Collection.” From 2005 MN has been available online through Project MUSE.

The early volumes included articles, translations, and reviews in German and other European languages, but from volume 19 (1964), English has been the sole language of publication.

A more detailed history of the journal, written by former editor Michael Cooper, appeared in the journal in 1998; it is accessible here.

In March 2020 MN published a monograph, Monumenta Nipponica: Eighty Years and Counting, presenting the story of the journal from its inception into the present. The PDF version is available in both high and low resolutions. 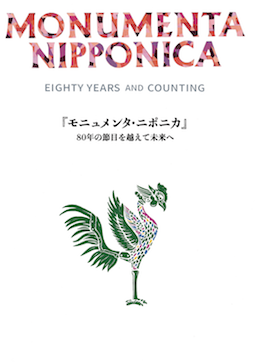 Since the journal’s founding in 1938, MN's mission has been to provide a forum for the exchange of ideas and presentation of recent research on Japan. MN thus welcomes contributions representing diverse disciplinary perspectives and dealing with all periods, from ancient to modern times.

Following a long-standing tradition, MN also maintains its commitment to providing a platform for translations of Japanese sources and texts. As of 2016, several hundred such translations have appeared in the journal. A list of these translations can be created using this website’s search function.