Choosing the Right Club or Organization While Studying Abroad

The first thing I did when I arrived at the University of Virginia was not go and search for my classrooms, or to check out the dining hall near my dorm, which everyone I met told me was the best on campus, but to visit a student activities fair that was taking place on the Central Grounds. To me, joining some kind of organization or club seemed the easiest way to get used to campus life here and meet new people.

The University of Virginia is a big school. Coming from Sophia University, I was used to a tiny campus, so the first few weeks I kept getting lost when I tried to get to the classrooms. It is so big that to get to classes from my dorm, I have to take a bus or I would have to walk for twenty-five minutes to the main campus. It is also a beautiful campus with old architecture that Thomas Jefferson established. In fall all the leaves turn red, yellow, and orange and they make the campus even prettier. Since it is a huge university, I see a lot more diversity among students than other schools. For example, whenever I visit my friends in Hampden Sydney College about sixty miles south, the majority of students there are white. Here at UVA, I meet a lot of Asian Americans, African Americans, Latinos and European Americans. This is what I like about my school. Meeting people from different backgrounds always gives me new insights and perspectives. Another interesting fact about UVA is that here we don’t say freshmen, sophomores, juniors and seniors to refer to ourselves or other students. We say first years, second years etc. And the campus is called grounds, so we say, “I am heading to the central grounds” instead of “I am heading to the main campus.” I struggled at first to follow these traditions of UVA, but I like the uniqueness of the school. I have to admit though, that it could sometimes be overwhelming to be in such a large school with tons of students. There are almost too many people that I don’t know who I want to hang out with or with whom I really get along. Here students are very independent and unless you put yourself into the environment you want to be in, nobody really comes to help you. That’s why finding a club to join was really important to me.

Returning to the day of the student activities fair, it was still a hot summer day and the area was already packed with so many students when I got there. First there were booths for numbers of fraternities and sororities. Then there were different sections ranging from cultural/ethnic, social, religious, intramural sports, college sports, and volunteering clubs. There were just so many to the point I almost got overwhelmed going around different areas. I think one of the perks of being in a big college is that you get to find at least one group of people you can relate to or feel close to. For me, this one group happened to be an organization called OYFA- Organization for Young Filipino Americans.

About an hour into the fair I was starting to get tired of going around. At that point I found some interesting organizations like free yoga, some volunteering groups and the Japan club. I signed up for all of them, but I wasn’t quite sure if I really was going to keep up with them. Even the Japan club didn’t seem that interesting to me. I was about to go back to my room and wait for emails from each club. That was exactly when a group of Filipino girls came up to me and handed me a flyer with a name OYFA. “Join OYFA, it’s really fun!” the girls were shouting as they were walking to give people the flyers. I had to stop and talk to them. “Wait, do you have to be a Filipino to join this organization?” One of the girls soon responded, “of course not, anyone is welcome!” Then we introduced each other and talked for a while. It was like going all the way back to high school in Manila where I graduated. It brought me back to all the memories in the Philippines, and that’s something I did not expect to happen here in the States. The way they talk with their Filipino accents, the way they always joke with each other and the fact that I can actually get some Filipino food with them are all the reasons I chose to join this club. 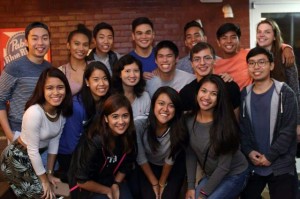 We have multiple events throughout the semester including cultural festivals where we dance Filipino traditional dance, Filipino food night, and even small study break sessions where we watch Filipino horror movies together on Halloween and eat some yummy Halo-Halo (A Filipino dessert). But this is not the only reason I like OYFA. I am fascinated and impressed by their effort of holding events such as minority dialogues where they share their experiences as Asian Americans, and a mentor mentee program where they get to practice job interviews or how to write strong resumes. The point I want to make is that these groups are not only for entertainment, but also provide an environment to learn from each other. Learning from people who share a common background helps motivate you and makes you eager to learn more.

You would think studying in the United States would mostly give you all the popular American experiences such as eating pizza and burgers (no offense, I love pizza and burgers), learning American traditions like Thanksgiving and Christmas, but if you actually look around, there are a lot more options. Through my search, I found a Filipino organization and got involved in so many valuable experiences.

(This article originally appeared in the first issue of Angles) 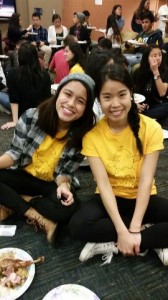